On the National Registry of Historic Places, Downtown Willoughby is friendly, safe, and fun to explore. With over 20 different restaurants, microbrewers, gastropubs, and wines bars, Willoughby is a foodie paradise. Located adjacent to the Chagrin River, outdoor patios are a great way to enjoy a glass of wine while taking in the surroundings.

Like to shop? Willoughby offers an eclectic mix of antique stores, clothing, gift, and jewelry shops.

So park your car in our private lot and enjoy the day or evening by exploring our friendly town..and don't be surprised if someone says hello! Are you an art lover, how about antique cars or does a summer concert sound like fun? Are you passionate about Farm to Table produce? Then you are in the right place. Downtown Willoughby hosts a number of premier events throughout the year...here are just a few: The Willoughby Outdoor Market has been the signature event for the "Heart of Willoughby" since July 9, 1979. Each Saturday morning from May to October, you will find the market right around the corner from the Bed and Breakfast

In its 27th year, this juried show hosts over 130 premier vendors from across the country. Have an amazing time strolling through downtown while enjoying some great music and food. Scheduled for the 3rd Saturday in July, for more info check out the ArtsFest website! Hosted by the Chamber of Commerce 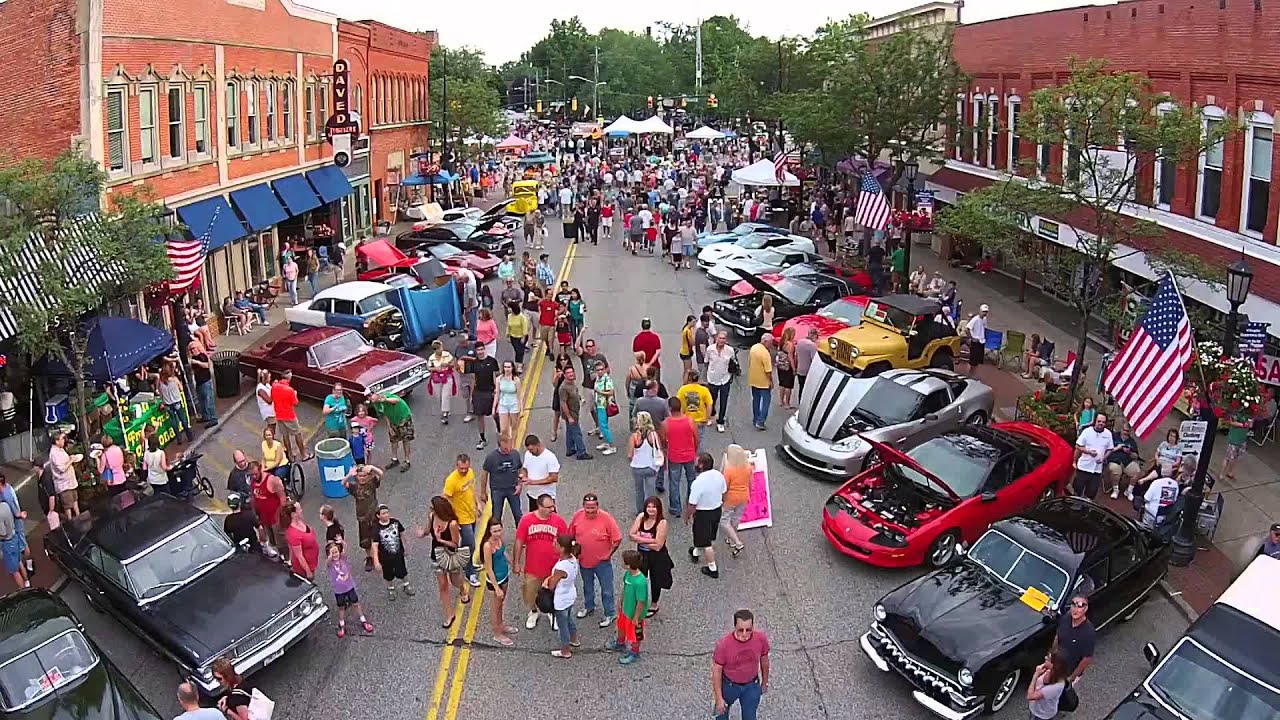 Oh What A Night!

Held the 3rd Saturday night in June each year, this event has become a great addition to the city. See amazing cars and trucks and talk to their owners. For more info visit the Car Cruise-In website.

Take a break. Willoughby's summer concert series may be just what the doctor ordered. Bring a chair and enjoy a concert at the gazebo in Point Park every Thursday night during June and July, weather permitting. DTW Rib Burn Off from Aerial Agents on Vimeo.

Drawing thousands of people from all over Northeast Ohio, the Downtown Willoughby Rib Burnoff two-day event held the third weekend of May gets better every year!

Three stages featuring live local and national bands plus vendors and a complete Activity Zone from The Bar Athletics, and, of course, ribs from participating downtown Willoughby restaurants & national vendors. Brought to you by the Willoughby Bar and Restaurant Association.

Collectors of Ohio lore love getting to know Willoughby's history. It's the only town in America that has belonged, at one time or another, to six different counties (Washington, Jefferson, Trumbull, Geauga, Cuyahoga, and Lake). The City bore two names before the current name was adopted; Charlton and Chagrin. Colloquially, the area was sometimes referred to as Abbott's Mill or Chagrin Mills.

Willoughby's early history parallels that of many northern Ohio towns. The area, first inhabited by Native Americans, was explored by French trappers in the mid-1700s. Part of the Western Reserve Connecticut land grant after the American revolution, Yale graduate David Abbott in 1787 made a trip west from Rome, New York, eventually acquiring 200 acres including what is now Willoughby and assembled a group of pioneers to settle in the area of the Chagrin River, building a sawmill and gristmill.

In 1834 a local group of doctors established the Willoughby University of Lake Erie Medical College named after Dr. Westel Willoughby, their former professor at Fairfield Medical College in New York. That same year, Dr. John Henderson, who also served as postmaster for the Village of Chagrin, officially changed the name of the village to Willoughby. As the folk lore goes, the medical college was supposedly run out of town for obtaining cadavers for anatomy training through unscrupulous measures.

The citizens of Willoughby have strong roots and a lot of pride in the connections to the past. Listing Willoughby's downtown on the National Register of Historic Places ensures its architecture and history will be preserved well into the future.